Cheerleaders, where are they?

Questions answered about why the cheerleaders aren’t cheering for sports other than football. 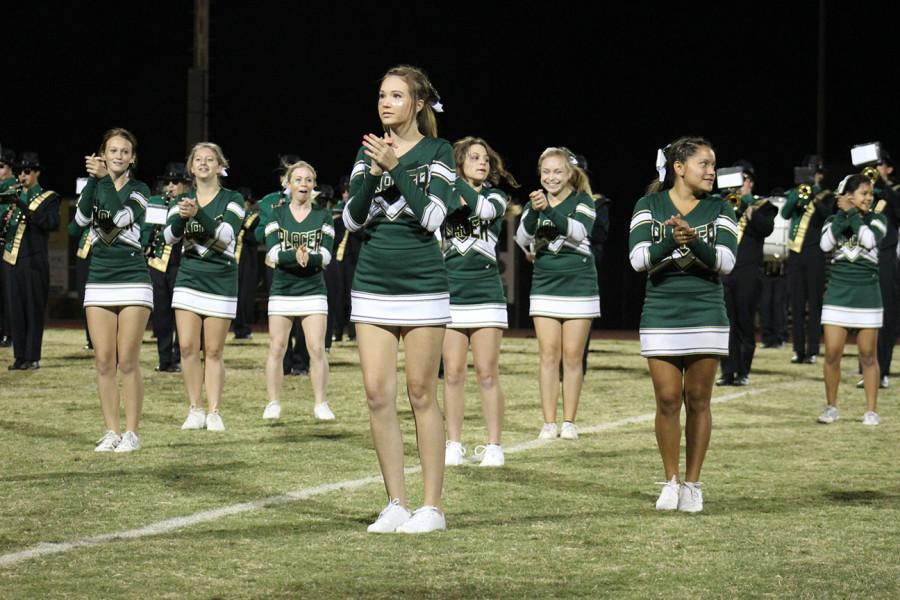 This year’s cheerleading squad performs at the Homecoming game. Some students wonder why they limit their appearances to just football and basketball.

You hear them on the sidelines at the football games, but why don’t you hear them at any other sporting event? Where are they? You may not hear them, however they are still there cheering in the stands. Whether they are in uniform or not the Placer high cheerleaders are showing their support to all Placer sports teams.
“Believe it or not we attend at least one game of every sport.” Cheerleading Coach Kaija Perkins-Uno says. “However some coaches do not want us there in uniform, cheering,” she continued. Coach Kaiya took over the team last year and is planning to change the face of cheerleaders. She wants girls who are good cheerleaders as well as good people in general.
Some sports teams and coaches do not want cheerleaders to cheer at their games. Sports such as volleyball, golf and softball require some level of silence in certain parts of the game. Katie Schawb, a freshman who plays two different sports has two different opinions. “I don’t know if I would want cheerleaders cheering for me in volleyball because after the referee blows his whistle you have to be quiet, and on some plays when they are really short the cheerleaders wouldn’t have time to cheer. I would for soccer though just because soccer is pretty close to football.”
Many girl sports players say it would be a little awkward for cheerleaders to come and cheer for them. However after talking with some boys they have a very different opinion on it. Most boy players say they don’t mind the cheerleaders cheering for them at all. However the cheerleaders appearance depends on the coaches and players allowance.
As well as football games and occasionally other sports the cheerleaders cheer at the rallies. This 2015 homecoming week Friday rally the girls all danced and cheered to a combination of new hit songs. Seven out of ten people said it was one of their better performances. “I really liked the thing they did with the seniors.” Francheska Cal and Jamie Stroud stated.
Whether the cheerleaders are allowed to cheer or not, cheerleaders find new ways to show their love. As well as attending one of every sports team game the cheer team also sends out gatorades to all varsity athletes on certain game days with little notes wishing the varsity player good luck.