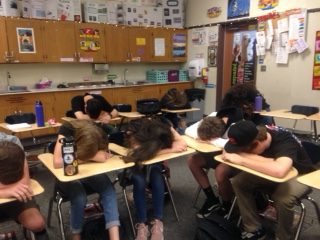 Have you ever felt your eyelids drooping during your first period class? Have you nodded off and almost fell out of your desk? Maybe you have even waken up in a pool of your own drool? Whatever the case, it seems that many students are struggling to get enough sleep and make it to class every morning.

This issue may be because the start of school is so early, meaning starting later could benefit Placer students. Outside of Placer, California is working to solve this issue. A bill to legally push the start of school to 8:30 a.m. was approved by California’s lawmakers on Friday, August 31, because studies have shown that teenagers tend to do better in school when it is later in the morning. However, this will not become a law until the bill is signed by California’s governor Jerry Brown, and the law will not come into effect until 2021. This is an exciting change in our schools that will hopefully be influential to student behavior.

“Teenagers’ melatonin [their sleep controllers] starts at about… 11:45 pm and completely ends… at… 9 am… so if they started school later, then people would probably pay more attention because… they would not be as tired,” expressed sophomore Maya Windgate. Pushing the school start time back could increase academic success because students might pay more attention in class, due to better focus at later times in the morning. Also, test scores and academic progress could potentially increase because students are wide awake and ready to begin class when starting later.

Science department teacher Thomas Schroeder stated that “some teachers would [also] appreciate having extra time to work in the morning.”  So this idea will also give teachers a cushion of time in the morning, or let them sleep in too.

However, because we would be starting later in the day, some activities, such as sports, would start later.

After talking about the benefits of starting school later, Windgate illustrated that “sports would also be pushed out later, which isn’t ideal for me [because] I’d be up really late doing homework.”

For this reason, starting later might impact after-school activities like clubs, band, athletics, and more because their meetings and practices would run later. Also, starting school later would mean a later dismissal time, which could be a problem for teachers and students alike.

Schroeder added that “other teachers wouldn’t want to be teaching so much later in the day.” As has been made clear, there are many sides to the debate on school start times.

“Studies have shown that when students get more sleep… they perform better in school. They have… better social [and] emotional health so am I all in favor of students getting enough sleep? Absolutely…” expressed Placer’s new assistant principal Tim Sprinkles. “Ultimately, I think that education and empowering students to understand what’s best for themselves, for their bodies, and for their own accomplishments… is the most important thing.”

While there are some disadvantages to starting school at a later time, Placer could see improvements in academic progress, attendance, and overall student excellency.