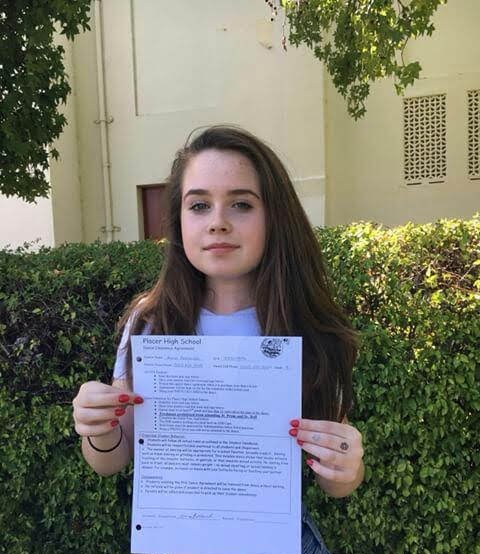 Placer High School now requires students and their parents to sign a behavior agreement form (in which many activities are prohibited) in order to buy a dance ticket.

Along with all the papers teachers sent home with their students during the first days of school (picture order forms, bell schedule, map of campus, etc.), a new behavior agreement form for dances was included. Students are required to read the form, receive the approval and signature of a parent or guardian, and present the form in order to purchase a dance ticket. The form also states that “agreements will be kept on file for the remainder of the school year,” meaning that the school has the student’s signature on all of the expected behavior. If there are any violations of the agreement, those at fault will be removed from the dance without warning; parents will be called, and refunds will not be given.

Terms of the agreement include no “sexually explicit dancing,” such as freak dancing or grinding. These include “dance styles that involve intimate touching of breasts, buttocks, or genitals, or that stimulate sexual activity… All dancers must remain upright – no sexual squatting or sexual bending is allowed.”

Mike Sabins, Activities Director and English teacher, stated that the permission slips did not go into place just this past year, but they have been around for quite a while. Sabins specified that the school made the rules and regulations of the dance much more clear  to make sure that the students knew what was expected of it. “The dance contract has been around for a long time; it’s not something that has just happened overnight. Last year we really started to make an effort and make sure that people understand a little bit better what’s going on and what’s expected of them. We figured that the more direct and the more to the point we could be with it, then people would get that message. [Yet] we still have people that push that line, and go over that line,” explained Sabins.

Kate Valdez, senior, shared her opinion on these slips: “I personally, within my friend group, have not seen dancing [at Placer] as a problem, but I can understand where people are coming from and how it can make others feel uncomfortable. I think the forms will help because if people read the consequences of what will happen, it will have more of an effect on them.”

While Valdez believes these forms might help prevent students from dancing inappropriately, other students, such as Sofia Robles, senior, think otherwise. Robles commented that “Placer’s past dances have been highly inappropriate due to the restrictions that the school fails to announce. Although they do put it in the school’s handbook, not many read it… Many students have a boyfriend or girlfriend that they ‘grind’ on, and officials don’t like that.”

Robles added, “I don’t think that the behavior agreement forms for dances are going to help prevent inappropriate dancing due to kids being kids. They will sign the forms because they have to in order to get into the dance, but there’s no guarantee that the students will go forward with the agreement.”

Many students believe that the permission slips were put into place because of last year’s Color Dance, but assistant principal Tim Sprinkles had something else to say about the subject: “I don’t think that it was just last year’s event that caused these forms to go into place but a graduate effect of different events over the years…” Although he was not at Placer last year, as assistant principal, Sprinkles has credible information on previous occasions such as these.

On the topic of behavior agreement forms for dances at other schools, Sprinkles said that “[there were forms] at my last school, and [they were] really clear about what students should and shouldn’t do. I think that people definitely have the right to express themselves when it comes to dancing, but people who are watching also have the right to be offended by what they are seeing. You should never do something that could be questionable in the eyes of someone else.”

Although there is a variety of opinions surrounding the permission slips, the fact that the students of Placer are still required to sign the forms in order to buy a dance ticket will remain.