Sierra Slusher becomes the only girl kicker on the football team, and is loving it 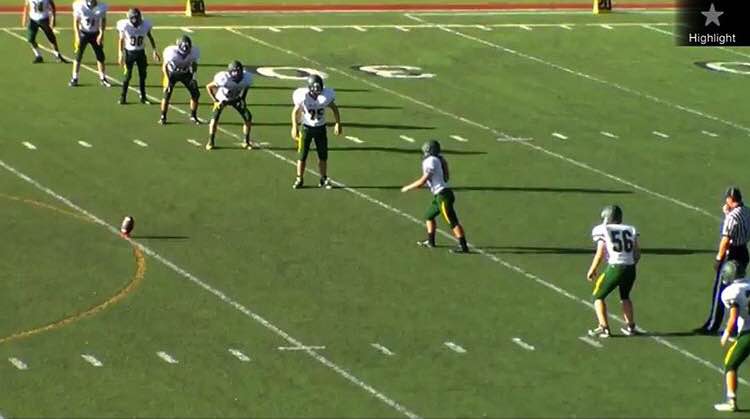 Sierra Slusher and team getting ready for kick off at Nevada Union High School. They won and have been underfeated since.

Diverse, motivated, determined, crazy; all words that come to mind when a female steps out on the football field; she’s not here to cheerlead or march with an instrument to her lips though. With expectations from others high, and the ones made for herself even higher, Sierra Slusher steps onto the field in full gear, ready to prove to her friends, family, teammates, and absolute strangers that she’s meant to be out there. Wearing the number 9 on her jersey, helmet on, hair pulled back, Slusher could almost pass for the everyday football player, except she’s not. Take a second look and you’ll soon realise there’s something that makes her distinctly different from the others.
Sierra Slusher is 15 years old and she’s the Junior Varsity kicker for Placer High School.
“It’s absolutely nerve racking stepping on the field with all those people watching” she confessed, “but my teammates have helped keep me pumped up, full of positive energy, and ready to play.”
On and off the field, Slusher is protected by the JV team full of her long-time best friends and new ones recently made when she joined the team.
“Everyone’s been super supportive, I’ve been very fortunate to be given this opportunity and I haven’t gotten hate from anyone,” Slusher stated multiple times enthusiastically.
Some may wonder whether or not she gets treated differently than the guys just because of her gender.
“The coaches, well they treat me like any other kicker,” Slusher beamed. “The guys really aren’t over-exaggerating when it comes to the amount of work they put in; and for that reason I have a huge amount of respect for every single player out there.”
When asked if she’s had to sacrifice anything other than time to be where she is, Slusher simply flashed a smile and said they only thing she’s had to give up was a little extra sugar here and there.
“I’ve had to eat healthier and have been drinking a lot more water, but that’s with every sport.”
Countless football players have had to be put on suspension around the country every year, and for one reason; grades.
“School always comes first” Slusher said honestly. “If you don’t have decent grades, you don’t play; and the coaches enforce that rule strictly.” But that is not a rational fear for her; balancing school and sports while keeping a grade point average of roughly 3.5 comes effortlessly.
Slusher does realize that there’s a chance she could get seriously injured, but thankfully she’s in ideal condition.
“Yes, I’m expected to be willing to tackle someone if they get through the rest of the line, like a sweeper in soccer.”
Thankfully the coaches have a “game plan” in order to keep her safe.
When asked how she was discovered, a smile crept over Sierra Slusher’s face. She explained that her cardio teacher, John Hilton, had noticed her kicking around a soccer ball with a few other girls in her class. Noticing that she had a lot of power behind the ball, Hilton set up a ball at the 10 yard line and told Slusher to kick it in between the yellow bars of the goal post; she did it with ease. After moving back farther and farther, Hilton suggested she talk to some of the coaches and consider signing up to play football. Slusher was hesitant, not completely sure she was cut out for the rough football experience. She’s been playing soccer since she was 4 but this was something completely out of her league. After many second thoughts and nerves at their height, Slusher decided “why not” and since then has been known as the “little sister” of the Placer JV football team.
Slusher thoughtfully stated that “other girls should play, it’s so much fun. They shouldn’t be scared to go out there just because it’s typically a guys sport.”
It makes sense that other females may fear getting hurt, standing out, or putting in the extra work, but coming from Slusher, that’s the best part.
“It’s a unique situation” she acknowledged, “there’s not that many girl players. I feel lucky to have the opportunity to play.”
The ever growing support from her friends, family, teammates, coaches, and even people she has yet to get the chance to meet personally drive her to do her best on and off the field. She says she would “need a lot more practice” if she would be ready to kick for the Varsity team next year but she would “love to do it.”